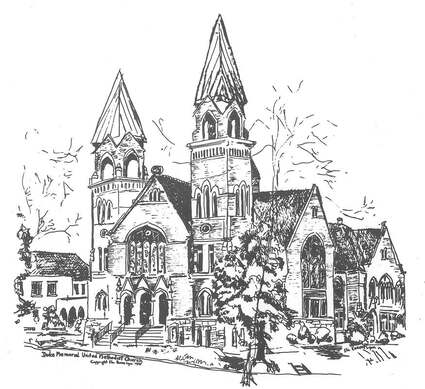 What would become Duke Memorial United Methodist Church grew out of the original Methodist congregation in Durham. Members of the Durham Methodist church, soon to be renamed “Trinity Methodist Church,” saw the need for new churches to serve the growing east and west sides of the city. Durham’s population was swelling thanks to the rapid growth of cotton and tobacco manufacture in the city. Tobacco firms like Washington Duke, Sons & Co, and W.T. Blackwell & Co. as well as thriving cotton firms like that of Julian Carr were bringing throngs of new workers to the edges of the city. J.J. Ward wrote of Durham in 1884, “I never saw nor heard tell of a town thriving any faster than Durham.”

Maude Wilkerson Dunn, daughter of Durham builder Albert Wilkerson, recalled a meeting between her father and Washington Duke: “Mr. Washington Duke was at our house one day and he said…“We’ve got to build another Church.” The factory was just beginning to go and people were moving in here. From just a mere nothing but a store or two beside the road, it was beginning to become quite a town. So Pap said, “We have Trinity Church.” Mr. Duke said, “Yes, but we’ve got to have one for the masses.” So they began, and Main Street Church was built.”

Industrialists like Washington Duke and Julian Carr did not want Durham to be only a wealthy city; they hoped that Durham would grow into a city which also had culture. Durham at this point was an economic boom-town, with the potential to become a rowdy and unorganized industrial city like many others in the American south and west.   Thus they encouraged the founding of institutions of civilized society, like churches and institutions of higher education, to accompany Durham’s material growth. The establishment of Trinity College in Durham and the building of this church are two primary examples.
Continue Reading

Searching the Duke Memorial UMC archives, housed at Duke University by the Divinity School Library, is easy once you get the hang of it. Tom McCauley provided funds to enable this project to take place; it is guided by the church’s history committee.
Search Archives

*Copies are avaiable for pick-up or mail from the church office.